born 1984 in Szczecinek, Poland,
lives and works in Poznań, Poland.

Mateusz Sadowski is an author of videso, photographies, objects. His hallmark is minimalistic form, frequently accompanied by black-and-white aesthetic which invokes natural elements, juxtaposing them with man-made objects, which – presented in various scales and frames – enable us to rediscover them.

The film Resonance was made using stop motion. The artist splits the recorded footage into separate frames which he prints and photographs, subsequently reassembling them into a film. The process – which provides scope for analysing the characteristics of two different realities – photography and video, is quite contrary. On the one hand, it provides the viewer with an insight into its own inception, on the other hand, the work itself is a finite product, a painstakingly detailed art film. Sadowski’s video is both a reflection on scientific theories about the structure of the world and an attempt to create an alternative reality. 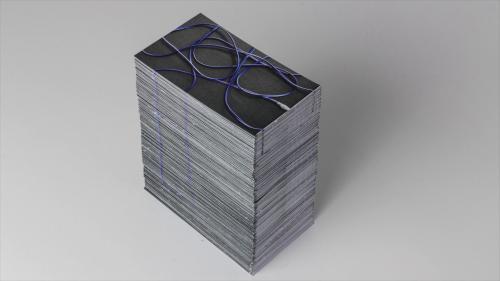